You can re-read parts one and two of our safari saga here and here if you‘d like.

Our second full day began with a morning trip to Victoria Falls, one of the seven natural wonders of the world, but it was the afternoon that provided a stunning highlight to our trip. Our group of seven was taken to Simonga, the nearby native village sponsored by our host camp, The River Club.

As we drove into the village on a rutted track, children materialized out of the orange dust that poofed up behind us. They followed, shouting and laughing delightedly, so thrilled to see us. Their joy at our arrival made me wonder at the price we pay for our own children’s happiness. 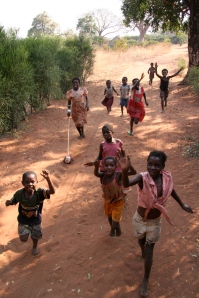 The people live in tiny dirt-floored, reed and mud huts, with the barest necessities, the children’s playthings are broken hand-me-downs, and their clothes are CARE package cast-offs. Yet they mugged for our cameras and screamed with joy when they saw themselves in the viewfinders. They touched us gently, were unfailingly polite, and they spoke to us in near perfect English.

The taller girl below didn’t know who Jennifer Lopez was, but she loved the bright red shirt.  She peered into my eyes as she followed me around, then she finally whispered, so sweetly, “Please, Mma, may I have your bag?”  I hated to say no, but I needed my little waist-pack for my passport and money. I did give her a pack of gum, and I knew, when I got home, that I would send a parcel to the village, and my bag would be in it.  (She shared the gum but none of them knew it was just for chewing — they thought it was food and swallowed.) 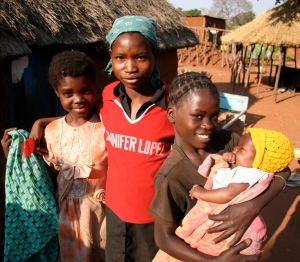 The older boys showed off their soccer skills with a shredded ball, and the girls took us to their new concrete block, one-room schoolhouse.  They were so proud.

Sadly, the AIDS menace hovers over their lives. In the schoolyard, a hand-painted sign nailed to a tree, warned, “You either have AIDS or you know someone who does.” One young girl, her cheeks tear-streaked, had recently lost her mother, her father, the year before.  She and her little sister were forced to live alone, shunned by others because both parents had died of AIDS.  Village women shared their meager food, but nothing more.

When Peter and I went to bed that night we found hot water bottles tucked under the covers!  It had been quite cold the previous night — wintertime in the Southern hemisphere — so the extra warmth was welcome in our unheated three-walled hut. Yet we enjoyed relative luxury while just a mile away, women carried water several miles from the river to their village where there was no electricity, no plumbing, little food, less money.

Earlier, I had bathed, bubble-covered, in an old claw foot tub, yet the natives had no way to bathe properly, and only lumpy pallets laid on dirt floors on which to sleep.

We learned that everyone in our group was as moved as we were, by the children especially.  Russell told us he takes every group he guides to Simonga Village, but he’d never seen such excitement as he’d seen that afternoon. “It was a magical day,” he said. “There was a spark.”

Simonga Village is prosperous compared to most, because it is sponsored.  We all wanted to provide books and toys, school supplies and clothes, but we were cautioned not to send new things because it would upset the dynamic between the village elders and the sponsor.

One couple sent used library books, another, uninflated soccer balls and pumps, and Peter and I sent barely-used coloring books, slightly flattened crayons, and a rainbow of leftover wool yarn my dad used when he hooked rugs.  My little bag was in the box too.

I was just about to publish this post when I thought to Google “Simonga Village.”  Go here and here to read about thrilling changes that have taken place.  And be sure to look at the photo gallery on the “For the love of Africa” site. You’ll note one thing has not changed — the AIDS warning on the tree in the schoolyard.

(The first and third photos above were taken by Peter B.)

4 thoughts on “It takes more than a village.”