Beautiful mountain views edged the hourlong drive from our home to Bedford, Virginia. It was June 6, and husband Peter and I were heading to the annual Commemoration of the Invasion of Normandy at the National D-Day Memorial. It was our fifth visit there since the opening ceremony in 2001.

Neither of us would have been aware of the magnitude of what happened that day in 1944 on Normandy’s beaches. Operation Overlord.

Peter was six, in London again after having been evacuated to the north with his mum when he was an infant. All he knew of the war were the bombed out buildings in his neighborhood, the thrill of finding scraps of wood to sell for fires, the hope of finding mortar shells or worse in the rubble in Hammersmith. A man he didn’t know he knew had moved in — his Royal Marine father, home from his post at St. Margaret’s Bay above the English Channel.

I was five, and all I knew of World War II in my Ohio home were blackout blinds on our windows, sirens sounding the all clear, rationing and victory gardens. I had carrots and radishes in my little plot, while my father grew other vegetables the rabbits wouldn’t eat.

Peter and I visit the Bedford D-Day Memorial because we are of that time, those days. His memories now are rooted in the old war movies he watches, but he was interested in the day’s goings-on. He tapped his foot to the music and smiled with amazement at the few WWII veterans present, fewer than a dozen this year. Later, when I asked if he’d enjoyed the day, he said, “Yes, it’s good to see the people and hear the words and the music.”

Captain (Ret.) Jerry Yellin, U.S. Army Air Force WWII Veteran was the keynote speaker. At 95 he’s still spry and active in his personal campaign to talk to veterans about post traumatic stress syndrome (PTSD), something he suffered from, without diagnosis, thirty years post-war. PTSD hadn’t been identified. Yellin has the unique distinction of having flown the final mission of the war on August 14, 1945. His wing-man, Phillip Schlamberg, was the last man killed. Today, Yellin travels the world sharing his story, bringing healing and hope to the new generation of veterans who battle PTSD.

A refurbished P-51 fighter, flown by Andrew McKenna, thrilled the crowd with a swooping three-pass flyover. As it streaked against the vivid blue sky of a perfect summer day, the horrors that happened on June 6, 1944 seemed more distant than seventy-three years. To those veterans who survived the day and were present to tell their stories, it was still fresh in their minds.

Flags surround soldier, cast in bronze, who storms the beach. 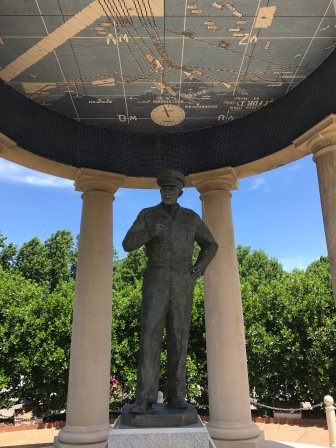 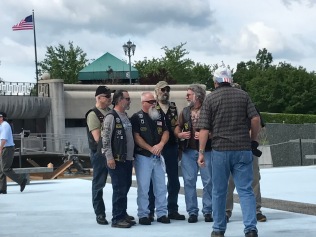 They helped the D-Day vets stand front and center to be recognized.

After enduring all the ordeals and training in England, we felt like we were completely ready for anything, and we were very ready to fight the Germans, and we looked forward to the day that we could actually get into the real fight.”
— Sgt. Bob Slaughter, 116th Infantry Regiment, US 29th Division. Slaughter led the effort to establish the D-Day Memorial in Bedford, home of the nineteen young men who were lost that day in Normandy.

4 thoughts on “A day trip from home.”