Use the left arrow above to read the lead-in to today’s post. In the first paragraph, you’ll see links to the first five in this series in case you’d like to read or re-read them.

xxxxxxxx       xElephants arrive for drinks. Our tent is the one in the middle.

Lions were the morning’s entertainment.

After lunch, our guide Russell told us, “When the animals rest in the heat of the day, we rest too.”  He promised the “thrill of a lifetime” later that afternoon, then sent us to our tents, wondering.

Husband Peter and I stretched out on our cots, but it was too stuffy for me to nap, plus the scene outside was too exciting to sleep through.  I plopped into a camp chair on our narrow deck, feet on the railing, cool, wet towel on my head!  Peter soon joined me; he couldn’t sleep either. We watched the smaller animals — baboons, dikdiks, zebra — come to drink with no elephants there to hassle them, nor lions waiting to pounce.  Again, I mused that this experience was like watching “Animal Planet” on a television as big as the horizon was wide, with authentic surround sound included. A simmering breeze carried the mysterious, earthy essence of the continent past our noses.

When we returned to the main tent for tea, Russell was antsy, anxious, ready to lead us to the thrill he promised.  We barely had time to drink a cuppa before he pointed to a haphazard pile of logs near the waterholes thirty yards away. “That’s where we’re going,” he said, smiling as if he’d just promised trips to the moon. “I’ll drive you right to the opening into the stockade and you’ll step inside quickly. We’ll watch the elephants for an hour or so.” Six of us — Arden and Charleen, Peter B, Bruce, Peter and I — were thrilled, but Marilyn gasped.  She’d never been close to a cow, much less an elephant.

That flimsy, higglety-piggelty pile of dead wood on the left is all that separated us from the elephants. We were inside that relative safety minutes before the elephants arrived.

Once in the stockade we realized any adult elephant could lift and move the logs if she wanted to. We were close enough to be sprinkled now and then, and we were, literally, surrounded by elephants. Russell said we were quite safe, but he did have his rifle on his shoulder.  “Would you actually shoot an elephant?” I asked.

He shook his head. “Just a warning shot,” he said, adding, “I’ve never shot an animal.” 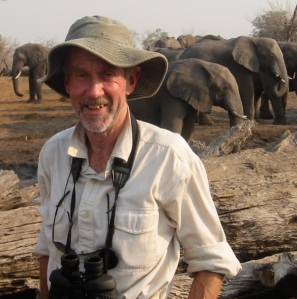 Baby ellies are easy prey. This youngster’s trunk had been gnawed off, probably by a lion or hyena.

The little guy was encouraged to kneel, head turned sideways, in order to slurp water directly into his mouth. 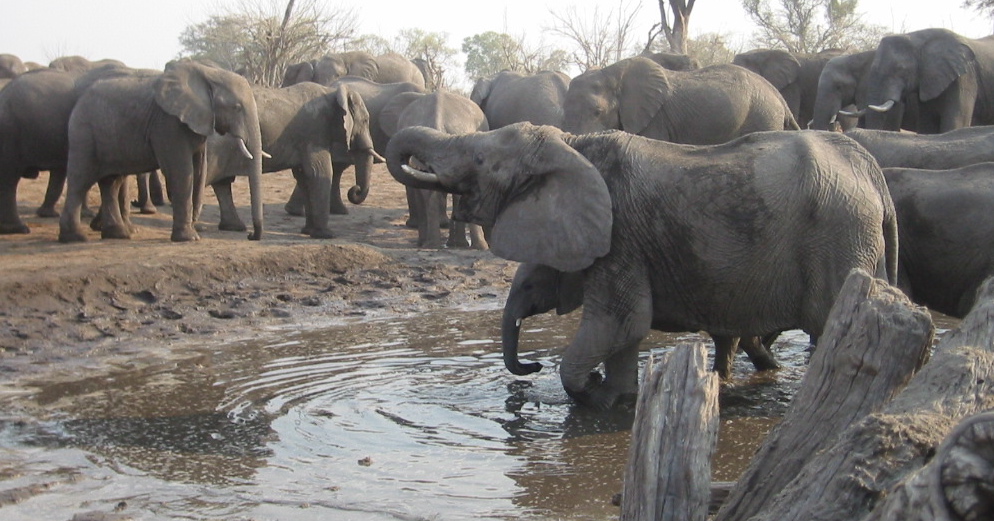 That evening Russell did a slide show overview of what we would likely see in days to come. He educated us about the geography and geology of Botswana, as well as its political background. During dinner, he was wide-eyed and extremely nervous. Finally he told us he’d just found out he’d been picked, out of all the guides in the country, to speak to his peers from around the world at a conference in San Francisco three weeks hence. This big, brawny man who ran alone in the bush in the heat of the day, who camped there alone at night, was petrified at the thought of traveling all the way to America to make a presentation to a roomful of people.

When we stayed at Savuti Camp in 2005, the Channel, also known as “the vanishing river,” had been all but dry for some twenty years. In 2007, it reappeared and is now a clear waterway again.  Hippos, waterbirds, and aquatic life returned with the water. There’s even a bridge into the site!

I snipped this photo off the web. The tent we stayed in is just visible on the left. The view from the deck now would be far different from the dusty outlook we saw nine years ago. (Compare to photo at top.)