“Don’t ask, won’t tell” is the credo of morel mushroom hunters. They guard the secret of their patches the way the NSA is supposed to guard our national secrets.

When I was little, my dad took me morel hunting in the spring, always with his caution never to tell anyone where we went. As if I, at eight or so, could’ve directed anyone to the woods where morel colonies hid under May apple leaves, or to the stretch along the train tracks where they flourished in the cinders beside the rails. We filled pillowcases with them and took them home for supper. Mom dusted them with seasoned flour and fried them in butter. Best meals ever, better even than a meal of fresh strawberries over warm biscuits with lots of cream and sugar.

My friend Joanne and I recently had an overnight getaway at a lovely place not far away on a river in the mountains — the name and GPS coordinates will not be revealed. We were clued in that there were giant mushrooms to see. I was to take my camera.

Six days of heavy rain had turned the place brilliant emerald and, as we arrived, the sun broke through like a searchlight from Heaven. The moss-carpeted ground sparkled with moisture, trees dripped, the river rushed, and there in the clearing, lit by a sunbeam, was the biggest darn mushroom either of us had ever seen.

After we carried our things into the little house that resembled something Goldilocks might have stumbled upon, and after coffee and several hours of chat, we headed outside on a ‘shroom search. Except for two enormous ones, I didn’t spot any. Joanne was a star. Everywhere she looked she found one, each different, all beautiful, some so tiny I couldn’t hold still enough to focus on them. (That’s my excuse anyway.)

There weren’t any morels, but they are springtime ‘shrooms. Even if we’d found some, I wouldn’t have trusted myself to cook them. Without even knowing about the bounty that awaited in the woods, I had fixed a mushroom crust quiche the previous day for Jo and I to eat that evening. Later, a Google search showed me that our giant mushrooms were among the deadliest in the world: Destroying Angel, Amanita bisporigera.

The Amanita mushroom genus contains some of the deadliest mushrooms in the world.
Certain species of Amanita contain amanitin, a lethal toxin that kills by shutting down the liver and kidneys…
Amanitas usually start appearing during the second half of the season, in summer and fall.
Look for them in woodlands on the ground. In many places they are quite common.

No “destroying angels in my quiche, thank goodness! 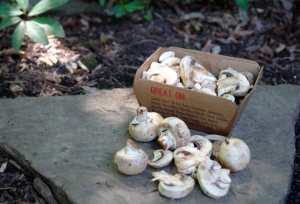 6 thoughts on “Not all angels are angelic.”