Our buckets were gently used ice cream tubs, Folger’s coffee cans, an oversized tankard, and one actual bucket that had seen better days.

We came armed with beach towels, hats, cameras, and high spirits in spite of the chilly, drizzly day.

We eight No Name Dames, representing a twenty-seven member group of “secessionist Red Hatters,” gathered to honor the memory of our friend Beth. She died a year ago after a nearly two-year struggle with Amyotrophic Lateral Sclerosis (ALS), more commonly known in this country as Lou Gehrig’s Disease.

Beth was annointed the Raconteur Royale of our group. She always had a funny story to tell or a Broadway show tune to sing. We know she was laughing and shivering right along with us today.

For our frigid dousing, we raised nearly six hundred dollars to add to the Ice Bucket Challenge. As of August 26, 2014, there are 79.7 million dollars from 1.7 million donors in that bucket! All in just two months. By this time last year, only 2.5 million dollars had been raised via the usual sources.

Our donation, perhaps just drops in the bucket, were our drops, and every little bit counts. 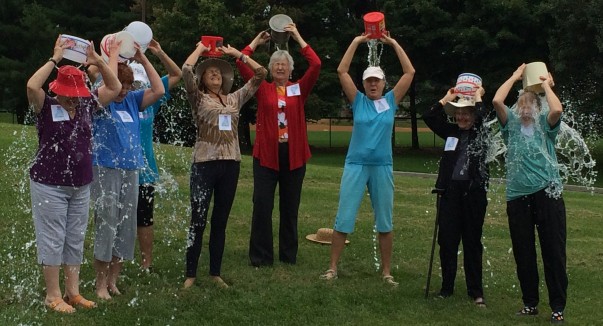