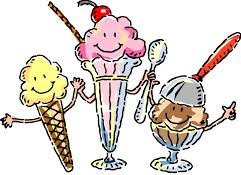 A group of friends gathered on a not-quite-so-sweltering day in July to chat and laugh and, not incidentally, eat homemade ice cream. It was an ice cream social in my own backyard.

This was not as far-reaching a destination as some adventures we’ve had. We’ve gone to events in Charlotte, NC, to the theater in Abingdon and Roanoke, we’ve lunched at nearly every restaurant around, we marched in July Fourth parades (we won the top prize once), but we’ve slowed down.

Age, not our fun-loving spirit, has applied brakes to all of us. We’ve experienced the pitfalls and heartaches that Life lays down like a thick layer of asphalt on a sweltering day. We’ve smothered beneath it, but we’ve dug out and gotten up again.

Co-hostess Joanne and I worried about our original plan for the group’s July outing. We’d wanted to have a picnic at Leslie and Martin’s river getaway. We fretted. Would the drive, the terrain, the threat of bug bites, and the distance (50 miles) from home be too daunting? Would anyone want to swim or go tubing, swing or play games?

I took a poll of the half of our 30 members who were here licking their spoons. Five, plus one likely “maybe,” would have gone on that outing. So, ice cream in my backyard was the better idea, as it turned out.

Close to home with second helpings.

4 thoughts on “Right in my own backyard.”