At the end of the 1950’s, most girls my age swooned over Elvis Presley. I was goggly-eyed over Pat Boone. “Love me tender” versus “Speedy Gonzales.” The popular girls were cheerleaders and majorettes. I played string bass in the orchestra.

Woodstock? Beatles? I scoffed throughout that era. The very idea. I came to love the Beatles, though I never could have endured Woodstock. All that mud! Yech.

Years before we knew each other, my husband went to see Bette Midler in concert. I saw Neil Diamond. Neither of those events were anything like a recent Friday night in our little town.

Nearly twenty years ago, daughter Leslie gave Peter a Squirrel Nut Zippers “Perennial Favorites” CD. He loved it. Even stuffy ol’ me got into it. I turned into a teeny-bopper fifty years too late. Leslie loved SNZ too, but she was a mere thirty-something at the time. This year, as her October birthday approached, I saw that SNZippers were coming to town. Did she and Martin want to go? 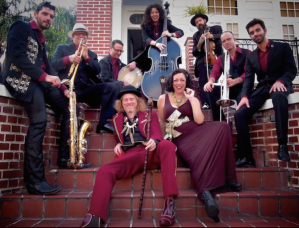 There we four were, orchestra seats, eight rows back, and there they were, blasting the theater with frolicsome, earsplitting, eyeball-popping, sweat-streaming musical madness.

Many from the audience crammed in front of the stage, dancing, hopping, jiving, singing. It was ninety-plus minutes of laugh-inducing, foot-stomping, hand-clapping hilarity. My tapping foot wanted to dance, but the rest of me played possum.

When I was as young as most of the crowd, I would have sniffed at the music and the antics. But all these decades later, I got the groove…if that’s how one would say it.

4 thoughts on “High on adjectives!”