Miss Mann was a stickler for every dash, period, comma, bracket, dangling participle and misplaced adverb. She hated run-on sentences, misuses of tense, wordiness, excessive use of exclamation points, prepositions at sentence-end, and misplaced quotation marks.

“One exclamation point or question mark is quite enough, class,” she’d say through clenched teeth, her trademark glare pronounced. “In formal writing we never use more than one mark.” Her shoulders arched toward her ears like tectonic plates and her shudder could have been the first rumblings of an earthquake. She viewed multiples of exclamation points and question marks, or worst of all, a question mark and an exclamation point together, as only slightly less awful than sticking an apostrophe in i-t-s — it’s — in a misguided attempt to show possessive.

When she recommended that we college-bound seniors buy our textbook, McGraw-Hill Handbook of English, we did . Mine is beside me right now. It went to college with me and to all the desks I worked at over the years. I’ve been retired long since, but my tattered textbook is still on the job. 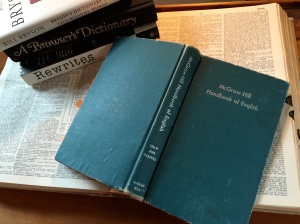 Five years after the class of ’57 graduated and ten years before Miss Mann’s passing, advertising executive Martin Speckter invented a new punctuation mark — the interrabang. It has a lot of different looks depending on the typeface …ahem…with which it is associated. 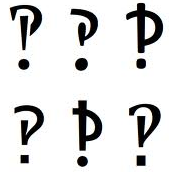 The interrabang (also interobang) is the brilliant, blended marriage of exclamation point and question mark. Had I known such a thing existed I could have used an interrabang many times, despite what Miss Mann might holler from her grave.

Speckter headed his own Madison Avenue agency. Frustrated with the growing tendency of his copywriters to pair exclamation mark and question mark to punch-up a surprised or rhetorical question — “Who would punctuate a sentence like that?!” — Speckter saw a need for a single punctuation mark to replace the annoying !? construction. He wrote:

To this day, we don’t know exactly what Columbus had in mind when he shouted ‘Land, ho.’ Most historians insist…he cried, ‘Land, ho!’ but…others…claim it was really ‘Land ho?’ Chances are [Columbus] was both excited and doubtful, but…at that time [there was no punctuation to] … combine and meld interrogation with exclamation.

Art director Jack Lipton did a set of speculative designs, below, for his boss. Speckter called the offspring exclamaquests or interrobangs.

The clever coupling of the two into a single character solves many punctuation issues. What’s not to love? Sadly, the mark never really caught on, but if you’d like to use one and if you use Microsoft Word, select the Wingdings 2 font and type the right bracket, ]. There you go — ‽ 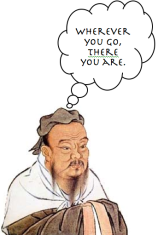 For more than twenty years I believed that our dear English friend Louie came up with the phrase “Wherever you go, there you are.” I’ve learned that not only did Confucius say it, but dozens of writers use it as titles on their blogs, and mindfulness guru Jon Kabat-Zinn wrote a book with Confucius’ words as the title. It has been centuries since Confucius (551-479 BCE) made that astute observation, so plagarism isn’t an issue.

I learned all this in the most roundabout way. I requested permission to quote from Kevin O’Keefe’s “Real Lawyers Have Blogs” post, “Blog to people, not at people.”  His words about blogging resonated: “I was taught to blog as if it were a conversation. … At times I have thought of blogging as letter writing. The kind we did by hand from college forty years ago. At other times, I have thought of blogging as being the late night DJ talking to a radio audience of one. … Blogging is about getting to know each other. Developing trust. Developing relationships. Developing reputations. This requires a conversation. Writing to people, not at people.”

O’Keefe referred me to author and business consultant Euan Semple, “The Obvious,” who approved my request to use his thoughts about good writing: “Good writing is more like letter writing. It is written to you not at you. It draws you closer, is offered to you deferentially, like two people who know and trust each other having a conversation, taking turns, listening as much as talking. It is our natural way of writing. …”

Semple referred me to John Kabat-Zinn  I didn’t know — duh-h — until I Googled the mindfulness guru about the book he’d written in 1994, “Wherever you go, there you are.” It’s still in print and I’ll have a copy for myself before another sunset. Here’s one of many memorable quotes: “Wherever you go, there you are. Whatever you wind up doing, that’s what you’ve wound up doing. Whatever you are thinking right now, that’s what’s on your mind, Whatever has happened to you, it has already happened. The important question is, how are you going to handle it?”

Kabat-Zinn, the father of modern-day mindfulness, further defines the practice like this: “Paying attention in a particular way, on purpose, in the present moment, non-judgmentally.” He also says, “Writing can be an incredible mindfulness practice.”

Old Confucius offered another twist on the words so many of us use: “Wherever you go, go with all of your heart.”

Like that, too. Maybe it explains my absolute  love affair with blogging.

Post postscript:
No sooner did I decide I’d polished this post enough,
than I got a surprise.
At our recent writers’ group meeting,
writer/friend John handed me a book.
“Look what I found!” he said.
It was a copy of Kabat-Zinn’s Wherever you go, there you are.
My friend didn’t know I’d been planning this post
nor that I wanted a copy of the book.
Serendipitous!

Of my thirty-five posts last year, “We may or may not remember” (May 9) had the

most views. And on the busiest single day, February 6, sixty-nine people viewed “Elephants and lions, oh my.” The post most commented upon was “What new car smell?” (April 14). I learned these and other statistics thanks to the WordPress 2014 Annual Report. Who knew statistics…numbers…would be a barometer for my writing?

There are various ways to find any blog, and my readers found me primarily via Facebook, MailYahoo, and webmailComcast. One connection thrilled me beyond measure — humorwriters.org, the Erma Bombeck Writers’ Workshop site. Editor Terry Rivzi published the eight posts I submitted from October 2013-14. Each time, I happy-danced around the house, hooting and hollering as if I were at a Virginia Tech football game, score tied, two seconds on the clock, inches-to-goal, VT’s ball.

A month before I published my very first post, September 13, 2013, I submitted three draft ideas to the writers’ critique group I belong to. Their enthusiasm encouraged me. I floated out of the meeting with Andrea who had two successful blogs running already.  She asked what my goal was —recognition, readership, awards, writing for the sake of writing? Easy answer — to write regularly and to be published. I knew that putting myself out there would keep me writing. And it has. I’m obsessed!

My most active commenters last year — CJ, Carolynn, Leslie, Linda, Andrea, and Joanne — brightened my days with their remarks, as did the others who took the time to read, write, and follow.

I’m still feeling my way along this blogging road that, for me, has been a lot like a logging road…bump bump bumpity. Sometimes the bumps are so jarring they bring tears to my eyes and curses to my lips.

For those who don’t know, WordPress (WP) is a free blog web-hosting service provider owned by Automattic. Their statistics are beyond amazing! For instance, there are nearly 60 million WP sites that receive more than 100 million pageviews per day. This tells you how insignificant my two blogs are in the grand scheme. But I’ve achieved my goals. I’m happy.

Additional WP statistics from 2014 blew my mind: every second, nearly six new posts are published on WP blogs. That averages out to 342 posts per minute, more than 20 thousand per day, some 7.49 million annually. What those figures mean to me is, in a few minutes I’ll click “publish” on this post and I will join five other bloggers that very second, 341 bloggers that minute, to say nothing of the 20 thousand bloggers this day!

Even a numbers-hater like me appreciates those kinds of figures!

Time flies. Today is September 13, 2014. Already! We’re not quite two weeks into the month, but Labor Day might as well have been months ago instead of just twelve days.

Is it age? Is it the way we live these days? Is it all the electronic wizardry we’re beholden to that makes everything instantaneous and time fly?  Whatever it is, I really hate it.

Twelve months, 365 days, 46 posts and 26,144 words later, I’m still here. Blogging activated my previously sluggish creative juices so that ideas tumble around in my head like clothes in the washer, while bad ideas still clonk annoyingly as if they were coins in the dryer.

On this date a year ago, I clicked “publish” and sent my very first post, “We’ve arrived and to prove it, we’re here”  out there, into the great wherever!  My heart pounded and I was so light-headed I thought I would faint. Terrifying and satisfying, at the same time.

A couple weeks later I was almost blasé about the publishing process. And, if you had peeked in my window on October 6 you would have seen me doing the happy dance because my seventh post, “Nasturtiums askance,” was accepted to the Erma Bombeck Workshop site. Since then ten more have been published there.

Last month, I jumped into the deep end of the pond and started another blog, “Dementia isn’t funny.”

What was I thinking?

Are you thinking, La-dee-whoopin’-dah?  Just who does she think she is anyway? Lots of people, millions of people, write blogs, multiple blogs, and they have a lot more followers than she does.

Well, fifty-three years before I was born, Emily Dickinson (1830-1886) summed me up in eight lines and forty-two words, in what has always been one of my very favorite poems. This is who I am:

How dreary — to be — Somebody!
How public — like a Frog —
To tell one’s name — the livelong June —
To an admiring Bog!