From Tennessee to the Canadian border, Interstate 81 lays down most of its 854.9 miles in Virginia, 324.9 to be precise. Paralleling the Appalachian Mountains, I-81 follows along Indian and early settler trails. A pretty ride if you’re in the passenger seat, but if you’re the driver zooming along at five or ten or fifteen miles over the limit, you can’t take your eyes off the road .

In Pennsylvania, heavy truck traffic labors up the hills while cars play hopscotch at terrifying speeds. Accidents that tie up traffic for hours are a given, and the drive is bum-numbing for passenger and driver. Until last week, I was always the passenger; now I’m the driver. Peter helped me brake, gasped occasionally, and pointed out interesting sights that I didn’t dare glance at.

Frackville, in Pennsylvania’s Wyoming Valley, was our destination, 379 miles from home, an overnight on the way to daughter Carolynn and husband Bill. It’s 596 miles door-to-door. Our stop was planned, but the relentless rain that jammed traffic into bumper-hugs wasn’t on our itinerary. What should have taken five hours, took more than six.

Driving is the best way to get there. Air travel doesn’t take long if you pay for a direct flight, but add in the drive to an airport, hours-early check-in, another hour to their home, and car travel proves quicker and cheaper. Then, when we return in a car stuffed with a huge pumpkin, three mums, gallons of fresh cider, jars of home-canned delights, boxes of cookies, as well as shopping finds and our bags, there are no added fees to pay.

When we neared Frackville, the GPS insisted on “hard right turns.” Wrong. After two loops on and off I-81, I turned hard left and there we were. Cold rain and wind hurried us inside. The motel was terrific — Holiday Inn Express — and there was a super breakfast bar the next morning.

Three more hours on the road and Carolynn, Bill and the dogs were waiting with big smiles, enveloping hugs, and doggy kisses.

The week was packed tighter than our car on the return — gourmet meals, cards, dominoes, dog walks, laughter, talking…lots of talking…especially when Carolynn’s friend Robin was around.

I’d already decided to drive home with no overnight. It is all downhill. We did stop for lunch at Frackville’s Dutch Pantry, noteworthy for its diner history, and treated ourselves to homemade ice cream.

No more non-stop drives in my future, though. Unh uh. I was reeling when we arrived. After 596 miles, my pillow called and visions of the week danced through my dreams. 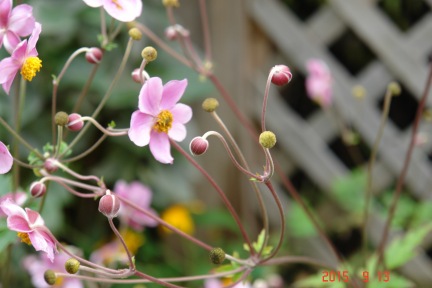 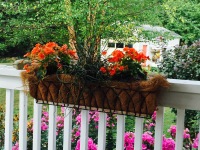 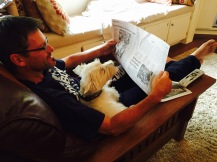 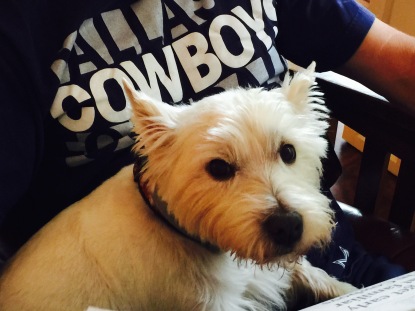 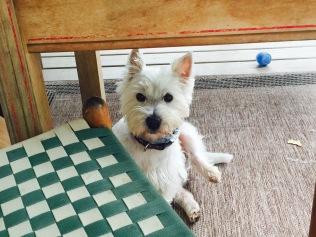 with Duffy close beside her. 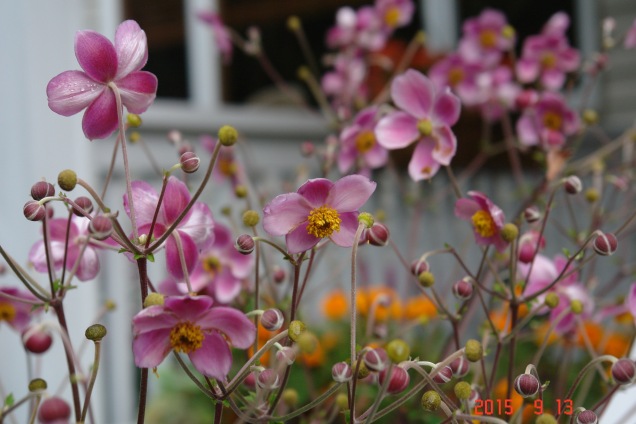